That is how political observers, politicians and media pundits are describing what is in front of the Minnesota legislature and DFL Governor Tim Walz as the legislature sets to convene next Monday, January 31. With a projected historic budget surplus of $7.7 billion sitting on the bottom line, negotiations between Walz, the Republican-controlled Senate and DFL-controlled House will last well into this spring and very well could end in a possible stalemate between the parties.

A few of the hurdles facing the legislature:

Governor Walz volleyed the first shot in what promises to be an epic budget battle last week when he released a proposal to use the budget surplus to issue checks of up to $350 to 2.7 million tax filers and $1,500 to an estimated 667,000 frontline workers in health care, long-term care, childcare and schools, to name a few. Walz also proposes to utilize $2.7 million of the surplus to replenish the Minnesota Unemployment Insurance program and pay back a federal loan that was utilized during the pandemic to keep the system afloat.

In December of 2021 Minnesota Management and Budget reported a record $7.75 billion budget surplus for the upcoming FY2022-23 biennium. In addition, the state has $1.1 billion in unspent federal funds from the American Rescue Plan and a $2.66 billion budget reserve in place. On top of this, the net general fund receipts for last November and December were recently reported to be 20% higher than originally projected. Simply put, the state is swimming in cash.

Governing with a surplus can be more difficult than with a deficit. The combined wants and asks from the administration, legislature and interested stakeholders are sure to dwarf even this historic surplus. House Democrats have been releasing glimpses into portions of their respective supplemental budget proposals over the last few weeks, with an early focus on climate change, expanding economic opportunity and public safety. Governor Walz has also started to release details of his priorities for 2022, which include a proposal to give Minnesotans $700 million in targeted tax rebates under the moniker "Walz Checks." Full details of the governor's budget proposal are expected soon, and a fact sheet for the Governor's plan to expand economic opportunity is available. We also anticipate a steady drumbeat on the political left to drastically increase the levels of investment in K-12 and higher education.

Republican legislative leaders will likely prioritize tax cuts to individuals and businesses and will likely be keeping an eye on proposals that could set the state up for future spending obligations. It should also be noted that since the state already passed a biennial budget in 2021, it does not necessarily need to pass a supplemental one in 2022. This could provide real leverage for the Republican controlled Senate as these debates progress.

Wish lists aside, some high dollar obligations are already waiting for legislators when they arrive this year. First and foremost, the state's unemployment insurance trust fund owes just over $1 billion back to the federal government for recent stabilization assistance. In addition, the state still has not approved a plan to distribute $250 million to frontline pandemic workers as agreed to at the end of the 2021 session. All of these factors combined with higher than normal inflation, and even a surplus this big can start to shrink quickly. 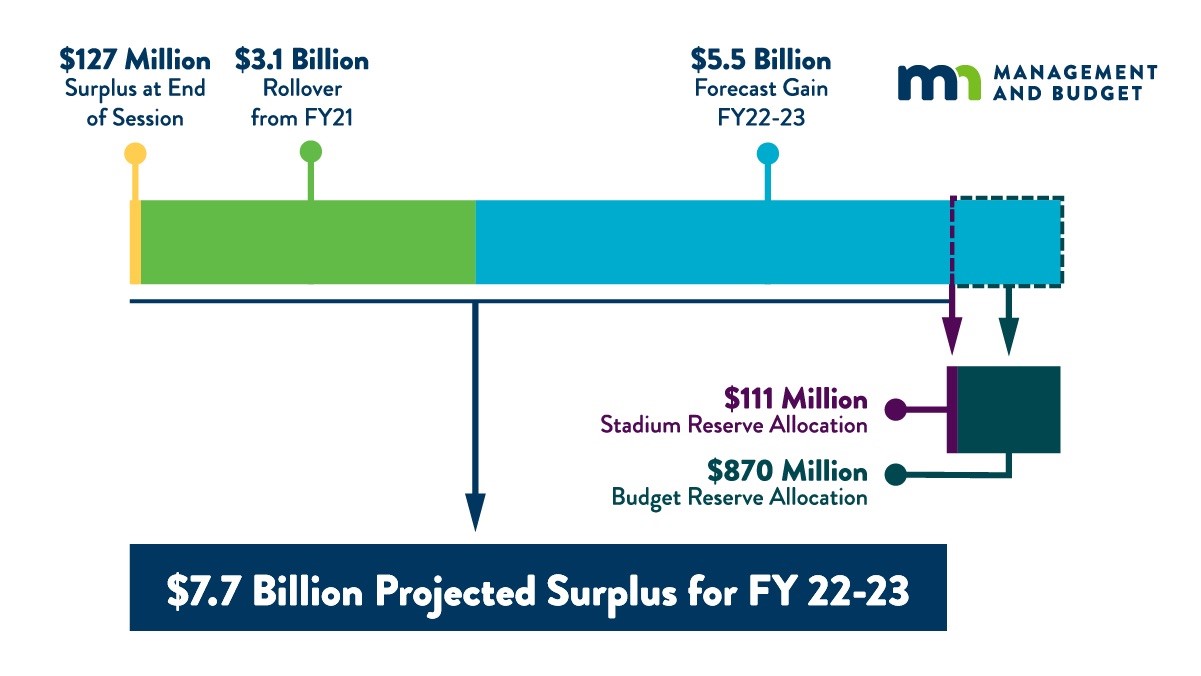 Cash for a Bonding Bill?

This year the legislature will work on passing a substantial capital bonding package for infrastructure and local construction projects. Governor Walz laid out his priorities this week, a $2.7 billion proposal focused on housing, community equity and preserving existing assets.

View a more complete breakdown of the administration's capital budget.

In the House, DFL Speaker Melissa Hortman has shared that her caucus will be introducing an even bigger bill—possibly as high as $3.5 billion. For the sake of comparison, the 2020 bonding bill was an all-time record for the state, weighing in at $1.9 billion. Early indications are that Republicans will set their spending sights much lower as they prepare their own priority list.

Bonding bills must meet a higher standard than the usual majority, needing a three-fifths vote to pass. This requirement usually amplifies the leverage of the House and Senate minorities in negotiations, but the sheer size of this year's budget surplus could add a new wrinkle: an all-cash infrastructure bill that would not require the same level of cooperation with the minority. Governor Walz' proposal already includes $276 million in cash—could that number grow as the session moves along? As these options are weighed, the relationships between legislative leaders will play a big role in arriving at a final deal. With new majority and minority leaders in the Senate, it will be interesting and important to watch how the various lines of communication are developed and whether any cooperation is possible. 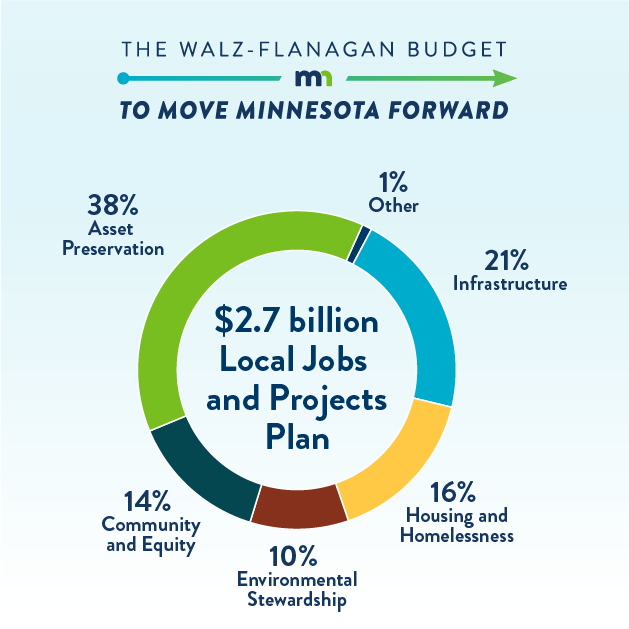 The state redraws legislative and congressional district lines every 10 years following the census. The legislature has until February 15 to agree upon a new map, and have it signed by the governor, or redistricting is turned over to the courts. With a divided legislature, it is a near certainty that the drawing of the map will be turned over to a five-judge panel appointed by Supreme Court Chief Justice Lorie Gildea. In preparation for this scenario, the panel held 10 hearings around the state last fall. It is expected the panel will release their map on or close to February 15 if the legislature fails to produce a map that is signed by the Governor. When the map is released, most work at the Capital will come to screeching halt while legislators review the new district lines. Legislators are frequently paired together and then have to decide if they will run against each other, move to a neighboring district or retire. Redistricting has a big impact on elections.

The stakes are high in the 2022 election in Minnesota. The state will see all constitutional offices (governor, attorney general, secretary of state and state auditor), all legislative seats and all Congressional seats on the ballot. The DFL currently holds all the constitutional offices, and all incumbents are expected to run for re-election for these offices. Republicans have a crowded field in the races for governor, attorney general and secretary of state. While midterm elections are typically bad for the party that holds the White House, the GOP has not managed to win a statewide office since 2006, when Tim Pawlenty won a three-way race.

Odds currently favor Republicans to pick up seats in the legislature, but that will also depend on how redistricting shakes out. If they ran on the maps that exist today, Republicans would be favored to have control of both the House and Senate. However, how the district boundaries are redrawn can have a major impact on the results. An additional factor is the high volume of legislative retirements that have been announced; it is expected after the final map is revealed that there will be a flurry of additional retirements. Whether by election losses or retirements, we can expect to see many new faces at the legislature in 2023.

COVID-19 at the Capitol

COVID-19 continues to loom large over the upcoming legislative session. There will continue to be restrictions on where the public can go and limited access to elected officials.