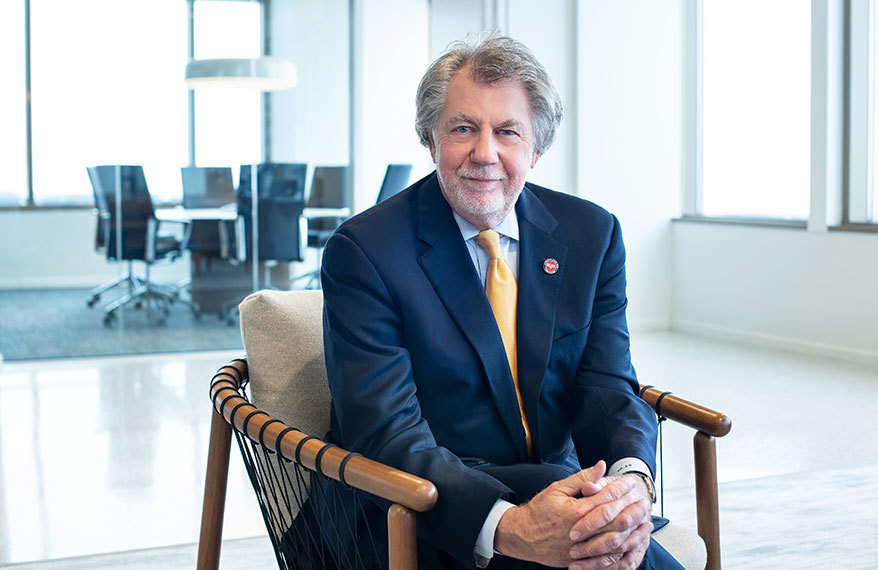 Tom “best exemplifies the pursuit of the practice of law as a profession, including a spirit of public service and promotion of the highest possible level of competence, integrity and ethical conduct.” Hennepin County Bar Association Attorney Professionalism Award

Tom "best exemplifies the pursuit of the practice of law as a profession, including a spirit of public service and promotion of the highest possible level of competence, integrity and ethical conduct," Hennepin County Bar Association Attorney Professionalism Award.

Tom's commitment to service and excellence is long-standing and well-recognized. He was honored by the United States Court of Appeals for the Eighth Circuit as the Minnesota recipient of the Richard S. Arnold Award for Distinguished Service and Lifetime Achievement. In addition to the Hennepin County Bar Association Professional Award, he was recognized as an Attorney of the Year by Minnesota Lawyer in 2015, and was recently recognized again as a 2020 Attorney of the Year for his Outstanding Service to the Profession. He served as the president of the Minnesota State Bar Association during its 2019-2020 term, and served earlier as the president of the Hennepin County Bar Association.

Tom served as chair of the HCBA Bar Memorial Committee for several years and still serves as a committee member, and was recognized by our firm as the recipient of its annual Pro Bono Award for Outstanding Legal Service in the Public Interest, arising out of his work with the University of Minnesota Law School Guantanamo Defense Project. He was invited to participate in the MSBA delegation to Cuba, visiting the National Union of Cuban Jurists. He served on the Board of Directors of Minnesota CLE, and founded the "Vintage Lawyers Group," introducing new and young lawyers to "vintage lawyers" in social as well as substantive settings. Along the way, he co-chaired the panel for the Eighth Circuit Judicial Conference on "Baseball and the Law" at Target Field, home of the Minnesota Twins.

Tom's dedication to diversity, equity and inclusion also runs deep. He was named as our firm's Champion of Diversity and Inclusion for 2019, and was selected by Minnesota Lawyer as a 2018 Diversity and Inclusion Honoree, in the "Legacy" category. He was recently re-appointed to the MSBA Diversity & Inclusion Leadership Council, after having served on the council prior to his MSBA presidency. He also served on the Diversity and Inclusion Task Force of the Federal Bar Association's Minnesota Chapter, as well as on the board of directors of the Givens Foundation for African American Literature, Global Rights for Women, and Twin Cities Diversity in Practice. He is the co-founder of the Collaborative Legal Community Coalition, a profession-wide group dedicated to remembering, honoring and learning from the 1920 Duluth lynchings of Elias Clayton, Elmer Jackson and Isaac McGhie.

His community service has included serving on the board of trustees of the Landmark Center in St. Paul, which served for many years as the location of Minnesota's U.S. District Court; and also on the board of trustees of the American Swedish Institute, including serving as chair. He was honored as the recipient of the St. Olaf College Outstanding Service Award, and is currently serving as a member of the Bloomington Charter Commission.

Along the way, Tom has represented a company in a lawsuit brought by Alice the Cat, and also represented two Cairn Terriers named Gus and Loki in their claim against a neighborhood pit bull. He represented a federally imprisoned espionage-related defendant in federal habeas corpus proceedings, and effected the arrest of an ocean-going merchant vessel in the New Haven harbor under applicable maritime law. He has represented Ringling Brothers/Barnum & Bailey Combined Shows in commercial, contract and municipal regulatory matters; and his First Amendment work has included trials and disputes involving AIDS-related as well as alleged mob-related defamation claims against newspapers and opinion-related defamation claims against public officials. It is no wonder that he and others have sometimes described his practice as "Door Law" (meaning, whatever comes in the door).

Prior to becoming a lawyer, Tom was a teacher and administrator in the innovative and alternative public high school in New Haven, Connecticut, called High School in the Community. After law school, he clerked for two terms (1977 and 1978) for Judge Thomas J. Meskill of the United States Court of Appeals for the Second Circuit.

Tom serves in the defense against an alleged TCE vapor intrusion matter involving a major manufacturing facility; defended against a supply contract lawsuit against a major pharmaceutical company, and represents a major participant in a "Trust Instruction Proceeding" (TIP) in Minnesota.

He has defended products ranging from trucks to table saws, and from exploding electrical switch gear and natural gas pipelines to saline-filled breast implants.

His corporate work has ranged from brewery-related lease negotiations; to the creation and sale of a highly sophisticated, engineering-related, invention-based emerging corporation; to advising businesses on doing business with Native American tribes; to law firm and corporate "divorces," break-ups and lawyer transitions; to more traditional corporate transactions and transitions.

In the financial enterprise world, Tom has served as lead defense counsel in credit cardholder class action litigation, and as counsel in lender liability claims, bankruptcy and workout matters, receivership proceedings, and credit card fraud investigation. Not surprisingly, he has sometimes described his practice as "Door Law" (meaning, whatever comes in the door.)

He was chosen to serve as a panel member on a multi-week, multimillion dollar computer-related AAA contract arbitration in Portland, Oregon, and has served as mediator in commercial and law firm disputes, as well.

Named among The Best Lawyers in America in the areas of commercial litigation, insurance law, banking and finance litigation, construction litigation and real estate litigation

Selected every year for inclusion in Super Lawyers®

U.S. District Court for the District of Minnesota, History Committee

Norway House, Past Board Member

Federal Bar Association, Past Board Member

Civil Justice Reform Act Advisory Committee, upon the appointment of then Chief Judge Paul Magnuson of the U.S. District Court for the District of Minnesota, Past Committee Member

The Playwrights’ Center, Past Board Member

The Izaak Walton League (Bush Lake), Past Board Member

Arts Midwest Task Force on Freedom of Expression, Past Member